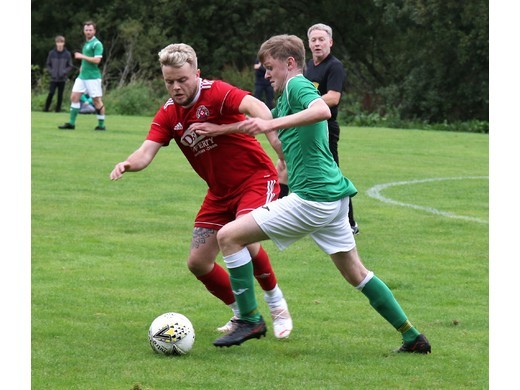 Wishaw High School FPs continued their fine recent league form with a solid performance today again Uddingston Anvil. Forward John Neill had a shot blocked by John Goowin after 10 mins and the same player shot just over only 3 mins later. The opener wasn't long in coming however and arrived after 21 mins when midfielder Luke Dickson saw his low curling shot find the bottom corner after good lead up play between Brian Ross and Josh Payne. Anvil keeper Brian McKegney done well with a point blank header from Jamie Halliday on 37 mins as he spread himself well to knock the goal bound header over the bar. The away side should have extended their lead right on ht but Josh Payne fired just over the bar from a neat cut back from Luke Dickson. The 2nd half saw the away side dominate possession in its early stages with chances squandered by John Neill and  JoshPayne but Neill made no mistake with his superbly hit drive from 20 yards some 10 mins in after the ball was laid into his path by the lively Payne. 5 mins later the lead was extended when Luke Dickson blasted the ball High into the roof of the net from around 10 yards out after he outmuscled his marker after a great through ball from the impressive Jamie Halliday. It wasn't all one way traffic however with Jamie Kane blocking what would have surely been a goal bound effort from Garry Mcstay and Kieron Markey also seeing his shot cleared off the line from FPs full back Zak Caldwell. A slight deflection from an Anvil defender was enough to deceive Anvil keeper McKegney as Brian Ross's 25 yard drive found the net with 15 mins to go. Fps manager Hadden  made several changes at this point and replaced Jordan Welsh for Ian Gray , Josh Payne with younger brother Robbie and captain James Bryson for Jamie Moir. The game reached its conclusion with no further goals though Mckegney had several good saves late on from Jamie Moir to keep it that way.

Many thanks to Gavin Torrance for the match report

A good 3 points, and we get off the mark at the 3rd time of asking.

We repeat the scoreline of the same fixture last year, and there was a familiar feel to the game. Similar to last year, it was a very tight game, not a lot of clear cut chances, with our keeper making an outstanding save to keep the game level at the break.

Gartcosh had more of the ball but never really put us under any sustained pressure, whilst we looked dangerous on the break.

We broke the deadlock with 10 mins to go, and managed to see the game out without much fuss. Delighted to get the victory in a close-fought contest, and we move onto our game next week in the West of Scotland Cup.

We were down to bare bones today, with a potential starting 11 unavailable. 2 players playing their first game for the club and only being to name 2 fit players on the bench. Full credit to the players who dug in and fought for the 3 points. Phenomenal attitude!

In the 53rd minute of the game Oban’s Scott Maitland and St Pats keeper Donaldson collided with each other as they tried to take possession of a loose ball, unfortunate as they both went to ground Scott took a knock on the side of the head. The injury was serious enough that an ambulance was called Scott was kept in hospital overnight for observation and latest information this Sunday morning that he will be getting home by lunch time.

Under the circumstance the Oban players were reluctant to continue, and the game was correctly called off.

As for the match, a competitive encounter of the entering kind.  A save from St Pats keeper Donaldson when the slapped away a wicked shot from Kyle Cooper to comparative safety, then an offside decision that cancelled out a goal in the 38th minute for the visitors were among the many talking points of the first half.

Then in a short eight minutes the second half lasted enough action to satisfy the harshest critic. Almost immediately St Pats carved out a good chance but were denied but stout defending. However, the clearance up field and some tidy passing left the excellent Cooper to exploit the situation with super strike that sailed into the net.

Undaunted, the Dumbarton men had the Oban defence rattled as the attempted to get the game back on level terms  but again, they were out of luck. Then, just as St Pats management were about to make some changes to the line up the unfortunate accident that brought proceeding to a halt.

Many thanks to John Rodger for the excellent work of fiction and photography.