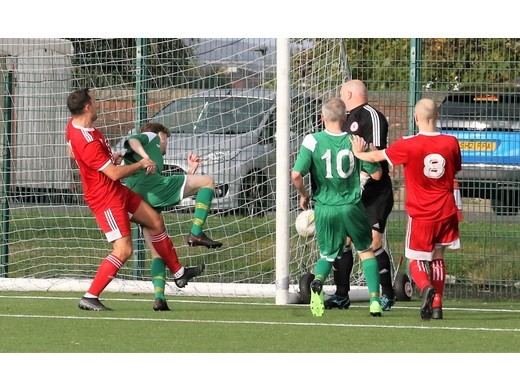 The hosts left it late but eventually sealed all 3 points in a hard fought encounter on the astro at Broadwood on Saturday. The visitors nearly opened the scoring in the opening minute when Sean Lindsay saw his goal bound shot unfortunately rebound off 1 post, bounce along the goal line before rebounding off the other post into the grateful arms of Eastfield keeper Shaw. Eastfield striker Daniel Hillhouse had a chance on 12 minutes but Wishaw FPs keeper Sandy Thomson pulled off an excellent save to keep the scoreline level.

On 23 minutes The FPs John Neill saw a speculative effort from 35 yards flash a yard or so past the Eastfield goal with Shaw scrambling to get back. The visitors opened the scoring with 5 minutes to go till the interval when captain James Bryson linked up well with the impressive Luke Dickson and Brysons cut back was deflected into his own net by Nicky Stewart. Shaw had a good save from the FPs John Neill 5 minutes after the restart but with 12 minutes in Eastfield drew level when a well delivered free kick was flicked on and found Nicky Stewart unmarked at the back post who made ammends for his earlier og to level matters at 1-1. The away side were unlucky not to regain the lead when Jason Thomson's shot was superbly blocked by Shaw minutes after the equaliser.

FPs manager Hadden rang the changes to push for a winner but with 5 minutes to go Eastfield took the lead for the 1st time in the match when Stewart found himself a bit of time in the box to divert an effort wide of Thomson to put his side 2-1 in front. Again, straight from the restart Thomson squandered a good chance to equalise when he blazed over.

Only a minute later however FPs Lee Hadden hauled his side level when he burst through and fired wide of Shaw to make it 2-2. In a pulsating game which wasn't yet over and was to take another twist when Mark Hansen's mazy run which should have been halted outside the box from an FPs point of view was allowed to continue and get his shot away which sailed into the bottom corner with no time left for the visitors to mount a comeback on this occasion.

Good luck to Chris and all at Eastfield for their upcoming Scottish Cup semi final and also to all at Drumchapel Amts.

Thanks to Gavin for the match report

Given the evidence the home side looked the more likely in a lively first half but poor finishing and a couple of impressive saves from St Pats keeper Gallacher kept us in tenterhooks. However, it didn’t escape notice that there was always a hint of real danger anytime St Pats got forward.

Around the 30-minute a quick break and pass from Jon Gray left Ciaran McElroy to find the net, unfortunate an accidental hand ball spoiled the celebrations.

Anvil responded immediately but wasted their territorial advantage following a fine save from close range by the Saints keeper, Paul McCabe was next when fired high and wide with the goal at his mercy.

The visitors would prove less generous when they got another chance. A classy through ball was picked up by the alert Ciaran McElroy, as he duly planted the golden opportunity beyond McKegney to give his team a surprised the lead after 38 minutes.

Still there was time for Kevin McElroy to be sent off. A unnecessary a second yellow delved the visitors into a gloomy scenario. Fortunately, the break would give the management team time to reorganize for what looked like a torrid second period.

No need to fret, stout defending saw off any threat posed by the home side, while any loss of possession left the likes of Martin Currie to spray the ball around to good effect. This left the Anvil looking vulnerable going into the last twenty minutes.

Yes, it would be Ciaran once again, advancing into the 18-yard box he drew Chris Owen into a rash challenge, giving the referee little choice but to point to the spot. So, more drama as Ciaran stepped forward his shot rebound high off McKegney, but no delight for the big keeper as Ciaran was quick to react, heading the loose ball home

Four minutes later a welcome third for the Saints and a hat-trick for Ciaran. Taking a free kick from distance the low drive zipped along the surface before bobbling in front of McKegney on its way into the net. Not finished David Connolly added to Anvil’s pain with a neat goal from close range following some neat teamwork.

So while the home side were competitive throughout the game in the end this was stpats day.

Thanks to John for the match report and picture

Oban Saints 4, Fallin 6
Oban Saints and Fallin turned in a 10-goal cracker at Glencruitten last Saturday with the Stirling side staging a remarkable fight back to take all three points.
A disastrous 18 minute spell at the end of the second half saw Saints throw away a two goal lead to hand Fallin the points

Goals from Kyle Cooper, Dene Cassells, Cammy Hill and Daniel MacCuish had the home side 4 - 2 ahead going into the closing stages of this Premier Division encounter. However, the visitors rolled up their sleeves for a stunning comeback in the torrential rain to bag four late goals and edge out the Oban outfit.

Thanks to David for the match report and picture.

Burn exited the Bunrigh League Cup after failing to trouble the Harestanes’ keeper for much of the game.

The opening midfield exchanges had no team taking the initiative.  Burn keeper Adam Young, the busier for the whole game, made the first straight forward save.  Around fifteen minutes, a quality passing move gave Harestanes the opener.

As the half progressed, Burn could not find their rhythm and Harestanes had several quality chances but didn’t convert.  Fox and the home side’s 8 were booked following some cross words.

Burn secured their first corner on 40 minutes but didn’t threaten.  Harestanes scored a second but ref called a foul on Young that surprised everyone.  Just on half time Young blocked out a trademark Harestanes wide move and cross field pass into the box.

Robert McPake replaced Ryan Aimer during the interval.  Burn started lively in the second half.  A Burn stone wall penalty was denied perhaps a levelling up by the ref?  Harestanes responded with several attacks en masse but didn’t score.  A rare Burn shot on 75 from a worked free kick saw Logan Downie’s effort headed away.  Another Harestanes shot saved and a second seemingly easy chance had Young scrambling along the ground to grab.  Darren Walker, Mark Fox and Captain Kenny Feakes had efforts that didn’t threaten.

Harestanes doubled their lead and followed it with another chance Young had to save.  Robbie Todd came on for injured Downie and Declan Wood came off for Niall Burns.  Burn put Mitchell Reid up front and his desire to win the ball created a Fox effort which he converted with eight minutes to go.  However as Burn chased the game a misplaced pass let Harestanes in for a third.

Reid and Fox had chances at the end forcing the Harsteanes keeper to his first save on 90 minutes.

Burn are at home to Fallin on Saturday 30 October.

The players committee and supporters thank Captain Kenny McLellan for is years of successful service to the club.  Kenny retired last week.  His courage, passion and leadership will be hard to replace quickly.  We wish new Captain Kenny Feakes all the best as he moves up from vice-captain.

Thanks to Derek for the match report and pictures.