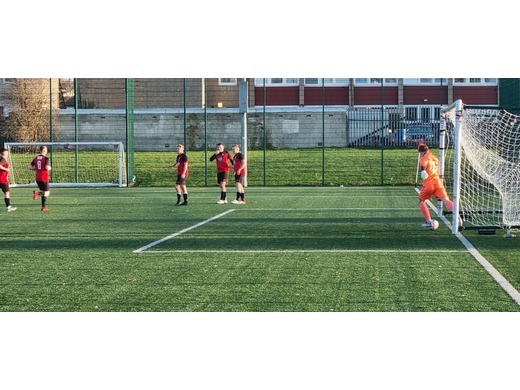 Wishaw High School FPs took all 3 points in an entertaining encounter at Wishaw Sports Centre on Saturday. The home side despite having the best of the opening exchanges fell behind after 24 minutes when a defensive mix up allowed Drum striker Connor Higgins to race in on goal and he made no mistake in firing past FPs keeper Thomson to put the visitors ahead. The response was swift and telling however with a devastating 20 minute spell which saw the hosts go in 3-1 up at the interval. Firstly with 32 minutes on the clock, striker John Neill continued his fine recent scoring run by finishing off a neat move involving himself and fellow striker Lee Hadden to level at 1-1. Five minutes later it was 2-1 when the returning Josh Payne with a fine shot past Drum keeper Stephen Mather. Payne again found the net just before the interval with a stunning curling effort with Mather struggling to give a deserved lead and 2 goal cushion going into half time.

Despite both sides playing some excellent entertaining football in the 2nd half with Drum determined to get back into it and The FPs stubborn defence determined to keep the 2 goal cushion intact there was to be no further scoring in the match.

Everyone at Wishaw High School FPs would like to take this opportunity in congratulating Drumchapel AFC in their victory last Tuesday night in the SAFA semi final v Shortlees and wish them all the best in their final some time next year v Tollcross Thistle.

Also commiserations to Chris all at Eastfield at the same stage of the competition.

Many thanks to Gavin for the Match Report

After Saints skipper Craig MacEwan had put through his own net in the first half, visitors Uddingston Anvil took full advantage of the generosity of their hosts to establish a two goal lead inside the first minute of the second half.

Despite a spirited second half performance there was no way back for the desperately out of luck Saints who missed a hatful of chances and found Anvil goalkeeper David McKegney in truly inspired form.

The Oban side's first self inflicted injury came in the 15th minute when Graham Douglas misjudged Darren Ferguson's in-swinging corner kick from the right and Craig MacEwan's attempt to clear the danger ended up in his own net.

The second half began in disastrous fashion for Saints when the visitors capitalised fully on possession gifted to them midway inside the Saints half. Caught in two minds with what to do with the ball Daniel MacCuish only succeeded in clipping the ball into the path of Robert Dimmer who in turn picked out the run of Kieron Markey. The teenage striker raced in behind the Saints back three and made no mistake in beating the advancing Graham Douglas to double the Anvil advantage.

The home side kept pushing for the goal which would bring them back into the game and only an excellent save from David McKegney kept the Saints attack at bay. Cammy Hill's 83rd minute cross field run from left to right had the Anvil defence trailing in his wake and his low shot looked certain to find the target until McKegney's intervention at full stretch finger tipped the ball around his right and post.
There was more heroics from McKegney 60 seconds later to deny Craig MacEwan after Matty Kelly and Daniel MacCuish combined to set up the skipper.

More good work on the left from Cammy Hill saw the big utility man fizz a low cross to Daniel MacCuish who thumped a shot off the left hand upright just as Darren Ferguson crashed into him. However, referee Ross Stirling, who handled the game well, saw nothing wrong with the challenge and allowed play to continue albeit without MacCuish who had to be carried from the field of play by the Saints physio.

The home team battled bravely but the experienced Anvil defence stood firm and the visitors ran out  2-0 winners in an enthralling fixture enjoyed by a good crowd of spectators.

Many thanks to David for the match report.

Burn progressed to round four of the cup with a tenacious display under their new management team.

Honours were even in the opening exchanges with Dylan McGowan and Mark Fox having early Burn efforts.  The visitors however went one up, taking advantage of a goal mouth scrap on fifteen minutes.

Burn gradually progressed to enjoying the majority of the ball on a sometimes bumpy surface.  A Brian McGinlay shot was blocked, a Wood low cross goal pass went a-begging and new manager Kenny McLellan’s free kick was saved by the keeper.

The second half continued with Burn largely controlling the game without serious goal threat.  Logan Downie had a goal bound shot deflected for corner.  Stewarton always looked capable of a threat and their next shot had keeper Adam Young happy to watch it go wide.

By the hour mark, Burn kept up their work rate as Stewarton may have started to tire.  A Wood cross goal shot went wide as Burn upped the pressure.  With twenty to go a Darren Walker perfect cross had McGowan head back across the keeper for the equaliser.  Minutes later Walker repeated a great cross for Fox to head home.  Fox doubled his tally making it three for Burn with a bullet shot from 12 yards.

McGowan put Wood through on goal with a quality good last ditch tackle avoiding a fourth.

Next week Burn are away to Uddingston Anvil.  Thanks to Tartan Arms for the post match hospitality.

Many thanks to Derek for the for the match report.

Drongan United were indebted to Marcus Worrall for keeping the score line respectable, they never looked like salvaging anything from the game after they had fallen behind with only 10 minutes on the clock. Martin Currie up in support of the McElroy’s, left United’s back line unsure who to mark, leaving Martin freedom to go around the bemused keeper before stroking the ball home from close range.

With Luke Gray suspended and Symington & Devine out with medium term injury St Pats had travelled to Ayrshire with a little concern against opponent’s team sitting joint top of Division 1 but now a chance to relax and put on some style.

On a heavy surface the visitors continued to dominate the ball but could not carve out a clear chance to score with all the possession they enjoyed till the 29th minute. Again, Currie had made his way forward and suddenly in possession of the ball on the edge of the 18-yard box but with his back to goal. Then without rhyme or reason a hefty two-handed push from his opponents left Martin sprawling to the ground and gave referee Thomas Gilchrist one of the easiest decisions of his career. For the record Ciaran McElroy to convert from the spot.

A third for the Saints followed before the break. A corner kick left Ross Cannon rising high to head flick down into the path Kevin McElroy who immediately fired the ball home with his first touch. Only Kevin!!

The home side would come out at half-time geed up, with Andrew Halkett and the rangy Scott Kennedy contributing with some purposeful play but the visitors were in no mood for any excitement and just before the hour mark, they sealed the matter with a super goal from Ryan McColl. Making progress up the left flank before tuning inside to find the space and time required to plant the past Worrall and into the far netting in his familiar style.

Minutes later a determined Ross Farrell won a free kick for the home side but again disappointment for the Ayrshire men when they were denied by Gallacher in full stretch along his line to clear at the bottom corner of his right-hand post.

It was now time for Ciaran to come off with a slight (we hope) strain but if the Ayrshire thought it was a relief they were soon mistaken when young O’Shea was introduced to brighten up the remaining with a mixture of guile and resolve with Ryan Deeley & Scott Smith also coming on to contribute to a fine team performance.

Many thanks to John for the match report