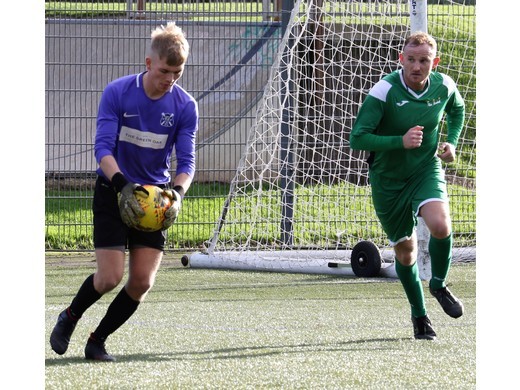 The FPs looked to bounce back from the disappointing defeat away to Eastfield last Saturday and managed to come away with all 3 points in what was an enthralling match on the 3g at Wishaw Sports Centre. Hares had the best of the opening exchanges with Liam Johnstone testing FPs keeper Sandy Thomson after only 8 minutes. Harestanes were causing problems with some well drilled free kicks into the FPs penalty area and Sean Lindsay did well to head a Mulvey goal bound header which had beat keeper Thomson off the line to keep the scoreline blank on 30 mins.

The hosts responded with full back Blair Kidd diverting a good header towards goal but his effort sailed agonizingly wide of the far post. With 10 minutes to go till the ht interval, The home sides Lee Hadden finished off an excellent move when he collected a pass from Brian Ross, laid a pass into Sean Lindsay who laid it back into the strikers path who sidestepped his marker before unleashing an unstoppable drive into the top corner of the net which gave Hares keeper Stewart no chance to put his side into the lead. The response from Hares was immediate and Johnstone squandered another chance to pull his side level when he pulled a cut back just wide of Thomson's back post. The FPs increased their lead 2 minutes before the half time whistle when Brian Ross latched onto a long pin point delivered kick out from Thomson drew Stewart off his line who tried to narrow the angle but the midfielders shot left the keeper with no chance much to the delight of his team mates to give the FPs a decisive 2-0 lead at the break.

The 2nd half was only 10 minutes old when the Hares hauled themselves back into contention when Johnathon Black pounced on some uncertainty in the FPs defence and rounded Thomson before seeing his shot from an acute angle come off the far post before rolling over the goal line. Black again and substitute Craig Young both squandered good chances to pull their side level in the next 15 minutes but we're made to rue not taking them when Jordan Welsh stepped up 3/4 of the way through the 2nd period and drove a stunning 30 yard free kick over the wall and into the bottom corner despite the best efforts of Stewart to keep it out. Both John Neill and substitute Nathan McConnell had speculative efforts late on before Johnathon Black grabbed his 2nd of the game to make it 3-2 but there was to be no way back for Harestanes with referee Kevin O'Neil blowing for ft just after the restart to give all 3 points to the FPs.

Many thanks to Gavin for the Match Report

The only surprise was the bright sunny weather greeting the two old adversaries on Saturday. This game is always taken seriously over the years and
even with a sprinkling of young players taking part for the first time, everyone was aware of the importance of the occasion.

Collective and personal duels the order of the day, with another surprise that only one serious chance was created during the opening spell when Kevin
McElroy left Martin Currie with an excellent chance, but Martins low drive went wide of the target.  However, with only six minutes remaining of the half and tension mounting we were all resigned to a stalemate at the interval. Then suddenly, out of the blue a cracking shot from Liam Rowan caught Kyle MacLean in the Greenock goal by surprise and as the ball spun out of his grasp Luke Gray was on hand the force it over the line for the visitors.

To compound their misery the Greenock players lost their concentration and shape as they persisted to no avail in claims that the goal was somehow offside. Sniffing blood St Pats double their advantage two minutes later, this time Martin would do justice to Kevin McElroy good work and inch perfect pass, firing a left foot shot through a crowded area and into the net.  Then as we all checked our watches the Saints would finish the half in real style. Michael Symington took possession deep in this own half, evading opponents as he raced up the right flank before inviting Kevin to finish his fine work with a vicious shot that gave young MacLean no chance to stop.

The second half was all endeavour with enough expendable energy produced to save the planet without any assistances from COP26.  The visitors out to
maintain their advantage remained solid, while Greenock spurred on by Chris McAllister produced a valiant effort to pull the deficit back for some consolation but to no avail.

Many Thanks to John for the report and picture and no prize for the COP26 mention.

Bannockburn won by the odd goal in what was a competitive match throughout.

Rearranged to Forthbank astro, a goalless first half produced few chances as both teams gave full commitment for their respective supporters.  Burn had a penalty shout for a foul on Mark Fox with the fans split over its validity.

The second half continued as the first.  In the latter quarter of the game, Fallin substitute Imrie netted for the opener.  As Fallin seemed to tire, Robbie Todd chased a lost cause to cross for Declan Wood who side footed into the net for the equaliser.

With two minutes to go Darren Walker shot low into the corner for the winner.  Burn stayed resolute to see the game out and secure the points.  Thanks to the Fallin team for joining hospitality back at the Tartan Arms.

Burn are at home to Lesmahagow on Saturday 6 November.

Murray Shaw Bannockburn 2008s signed for Glasgow Rangers last week.  The Wallace High striker loved his time at Bannockburn and still refers to Burn as “Us”.  Thanks to the 2008s sponsors Bruno’s take away and Colin Nichol butchers for supporting the 2008s team.

Many thanks to Derek for the Match report and pictures.  The league also wish the very best of luck to Murray with Glasgow Rangers. 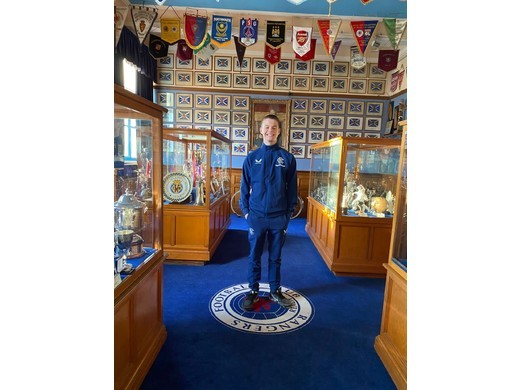