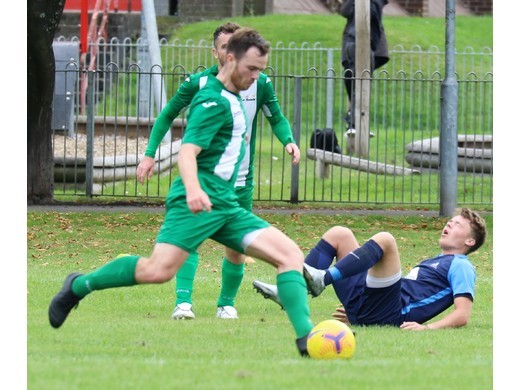 On 8 minutes, St Pats managed to make the breakthrough. Picking up a pass from Liam Rowan, Ciaran McElroy managed to skip past a couple of challenges before steering a right-foot shot beyond Craig Gemmell from 8 yards out.

If that set the tone for the early exchanges the home side was given a warning 10 minutes later. Following a spirited response, the visitors cursed their luck when a super effort crashed off the underside of the crossbar before being cleared.

This is when the home side upped the tempo against their near neighbours and a double strike from Ryan Deeley before the break. His first and St.Pats second was special as it took the big man three attempts from close range before he forced the ball over line. Talk about losing the will to live, however his second goal just before the break was a straightforward low drive that gave Gemmell no chance to rescue.

The second half started in similar vein to the opening 45 minutes. With and a slight change in formation David Connolly was off the bench as the Saints continued to take the game to their opponents and within minutes a fourth goal. It came via a corner kick when the excellent Gemmell could only divert a shot for Ruane out of play and when the cross was delivered Scott Anderson was on hand to head the ball into the roof of the net.

To their credit the visitor would respond with a flurry of resistance, but the die had been cast. Kevin McElroy added a fifth with a (rare) neat header just before the hour mark and that was the signal for the remaining substitutes to be introduced for valuable minutes.

Remining in control, St Pats would add their tally with two contrasting goals as the game entered the final quarter.  David Connolly, from close range followed by a Liam Rowan special from some 35-yards that would add a little gloss to the occasion. Now attention turns back to domestic business with a trip to play Oban Saints this coming Saturday.

Many thanks to John Rodgers for the Match Report and picture.

5-0 at ht with goals from Luke Dickson (2)Sean Lindsay, Brian Ross and Josh Payne. Further goals in the 2nd half saw both Luke Dickson and Josh Payne nothing hat-tricks and Jamie Moir along with an og leaving the FPs to comfortably progress to Rd 2.

Many thanks to Gavin Torrance for the match Report.

Good victory sees us into the 2nd round of the National Cup. Despite missing 5 players from our recent starting line-ups as well as a couple of long-term absences, we still managed to field a team strong enough to comfortably dispatch of Westcliff.

We got off to a good start and took the lead from our 3rd penalty in 3 games, we added our second soon after and were well in control of the game. Fair play to Westcliff who never threw the towel in and kept battling away. We went on to add a third and a fourth before half-time, giving us one foot in the draw.

We were dealt a blow shortly into the second half, losing another player to injury, this time a broken collarbone. This never changed the flow of the game, we made all our subs and continued to dominate the game.

We scored numbers 5 and 6 to wrap up the tie, and we headed home happy enough with our performance and with a good result. All the best to Westcliff, with a special mention to their number 7 up front who was a very good player indeed.

Many thanks for the match report taken from Castlemilk Dynamo’s Facebook page.

Almost opposite to what we’ve reported recently. 1-0 up when we caught Castlemilk on the counter and Zaki Djoudi finished well. OBC were the better side and when they scored to make it 2-1 on the 90th minute it all seemed over for us and a deserved win for them. Especially when they went 1-on-1 after and could have scored a 3rd.

We’ve went long in the last second and Barry Waddell gets fouled in the box. Up steps Daniel O'Brien to equalise and take it to penalties which we won 3-2. It wasn’t pretty but we’ve rode some bad luck of late and we’re absolutely delighted to be in the hat for the next round of the competition. Particularly having been dealt such a tough tie. Hopefully someone rubbish got a bye

Thanks to our sponsors - 2gether Property Maintenance, Whitecross Plastering Ltd.

Many thanks to David Ampleford for the Match report.

Narrow win for Harestanes in Oban

After their recent 9-1 thrashing at the hands of Lesmahagow Oban Saints faced another tough challenge when they took on high flying Harestanes at Glencruitten last Saturday.

Manager Willie Gemmell had most of his squad back after missing the Lesmahagow game and made five changes with Graham Douglas, Scott Maitland, Myles McAuley, Matty Kelly and Ross Maitland coming into the starting line-up.

Harestanes started the better of the two teams and Liam Johnston sent a header past the post in the first minute. Paul McLaughlin had another good chance in the 16th minute but Saints keeper Graham Douglas made a fine save.

Saints were under a lot of pressure in the first half, but stout defending from central defenders Steven MacLeod and Dene Cassells kept the eager Stanes’ forwards at bay.

The home side came close in the 25th minute when a Lewis Cameron shot was well saved by young Stanes' keeper Mathew Lewis who pushed the ball out for a corner with Dene Cassells heading the resultant kick over the bar.

The interval arrived with the Kirkintilloch side having much the better of the first 45 minutes but Saints were still very much in the game and in fact nearly took the lead in the first minute of the second period when a Kyle Cooper header was brilliantly touched over the bar by Mathew Lewis.

The visiting keeper was in action again when he saved from 16-year-old Cooper who had been sent through on goal by a slide-rule Craig MacEwan pass. The home side were claiming the ball had crossed the line but referee Tom Cavanagh waved away their claims

Donnie Campbell who is still gaining match fitness after being out of the game for a while came on for the injured David Beaton. He was quickly into the action but his shot fro 18-yards screamed over the bar as did one from Lewis Cameron two minutes later.

Harestanes took the lead in the 69th minute when the Saints’ defenders switched off after Myles McAuley had given away a free kick. The ball was swung into the box and Paul McLachlin sneaked in behind the Saints’ defence to head the ball past Graham Douglas and into the net.

The game was flowing from end to end as it entered the final stages and the visitors have James Mulvay to thank for a great block on the six-yard line to stop a Donnie Campbell goal-bound effort.

There was no further scoring with the visitors picking up a good three points away from home in a hard-fought encounter.

Saints Gaffer Willie Gemmell was a lot happier this week. He said: ‘It took us a while to get into the match, but after we settled down we gave as good as we got. We just switched off at the goal and you can’t afford to do that at this level against an experienced team like Harestanes.’

Harestanes are back in Oban again on Saturday 18th September in the first round of the West of Scotland Cup where another cracking game is anticipated.

Many thanks to David Buchanan for the Match Report and the picture. 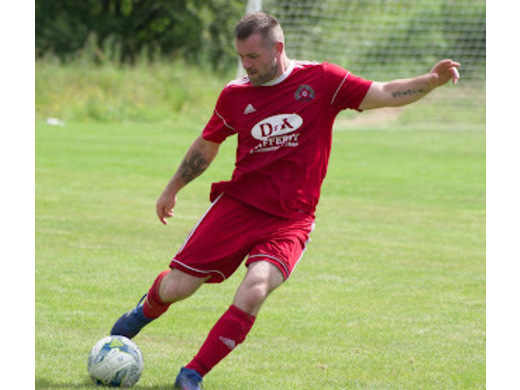