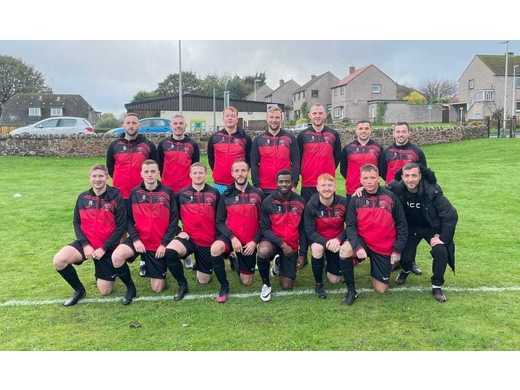 We march into the 4th round of the Scottish Cup after a good victory against a very good Strathmiglo side.

We took the lead from the penalty spot before Strathmiglo equalised and had their best spell of the game towards the end of the 1st half.

Second half we came out the blocks flying and scored after 30 seconds. A well-worked goal. We scored again shortly after with a return to Bobby goals classic dink finish ����. We went 4-1 up and looked comfortable.

Strathmiglo brought one back through a penalty of their own, but we managed the rest of the game extremely well, and prepare for a journey home which will be extremely quiet and civilised.

The play was in its infancy, yet to settle into any pattern, when St Pats shot ahead. Pressing his opponent into giving up possession Neil Allan continued in attack mode before Kevin McElroy took control with a super finish, his measured cross curling over the heads of defenders before dipping in at the top far corner of the net.

In their first visit to Moray Park, St Pats already seemed at home and were evidently the happier of the teams. Keeping their opponents at bay while probing at will the only mystery, was the wait for a second goal.

However, patience is golden and with six minutes remaining of the half Ciaran McElroy teasing and tormenting out on the left before delivering a low cross into the mix that ended with a cool finish from Luke Gray at the back post.

No change into the second period with the visitors still inside a comfort zone, with a quick counter they breeched the Castle defence for a third and vital time in the 56th minute. Again, it was Kevin the centre of attention keeping possession before cutting the ball back to the waiting Martin Currie who left keeper Callum Davidson helpless with a wicked first touch that flew into the net.

The game developed into a midfield battle with even the pacy Chris Paterson in a personal duel with St Pats Michael Symington never got the time or space to express himself, while Niall McClure also worked hard to get the locals moving only to remain frustrated.

Still, late in the game the home side found a renewed sense of purpose with Calum Paterson going on a mazy run from deep. However, St Pats were in no mood for any late excitement or frayed nerves as at the end of the day and Calum’s adventure came to a sudden halt when Stephen Gardiners intervened.

In the end a fine team performance in a game without any controversy or more importantly no more  injury concerns as the team enters a busy couple of weeks and the hopefully return of Ruane, McColl & Liam Cowan safely back in the squad.

Many thanks to John R for the match report and picture.

Oban Saints crashed out of the Scottish Amateur Cup at a wet and windy Glencruitten last Saturday afternoon. Daniel MacCuish gave Saints the lead in the 34th minute however spurned opportunities to increase their advantage before the half-time interval proved very costly for the home side when a quick fire Connor Higgins brace for the visitors turned the tie on it's head inside six second half minutes.
Prior to kick-off referee Joe Todd led both camps in a silence of remembrance for St Roch's Juniors Manager Paul Kelly who sadly passed away during the week.
Saints opened the scoring in the 34th minute from a free kick inside their own half following a foul on Lewis Cameron. Willie Gemmell rolled the ball short to Myles McAuley who strode forward purposefully this time picking out Daniel MacCuish for an accomplished finish into the top corner from the edge of the box.
David Beaton was inches away from doubling Saints lead diving in at the back post after Drum skipper Paul McConachie had headed a 39th minute Lewis Cameron free-kick back across the face of his own goal.
On the stroke of half-time a perfectly timed tackle from Adam Douglas foiled Cammy Hill who delayed pulling the trigger when through on keeper Stephen Mather just long enough for the Drum fullback to get his challenge in.

The Second half was just three minutes old when Saints were made to pay for their missed first half opportunities. Paul McConachie and Jack Wilson were both allowed to race in unattended at the back post from an Alan Kelly free-kick from the right. McConachie squared the ball into the path of Connor Higgins who prodded past Graham Douglas from six yards. Saints appealed loudly for an offside decision but referee Joe Todd saw no infringement and further upset the home side by cautioning Willie Gemmell for dissent.
Three minutes later the turnaround was complete with Higgins knocking home from just a few inches after Graham Douglas had clawed a dipping and swerving Jamie Ross effort from underneath his crossbar straight to the feet of the onrushing striker.
Still with a semi-final appearance from the covid disrupted 2019 - 20 season to look forward to, Drumchapel were in no mood to allow this season's Scottish Amateur Cup run to come to an end and in a controlled second half performance gave the Oban side little encouragement in their search for an equaliser and held out fairly comfortably to win an enthralling encounter by the odd goal in three where no quarter was asked or given by both sets of committed players. 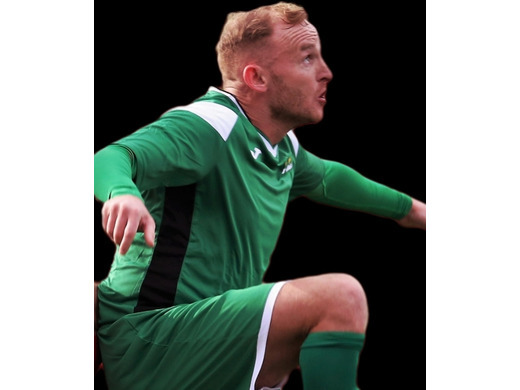