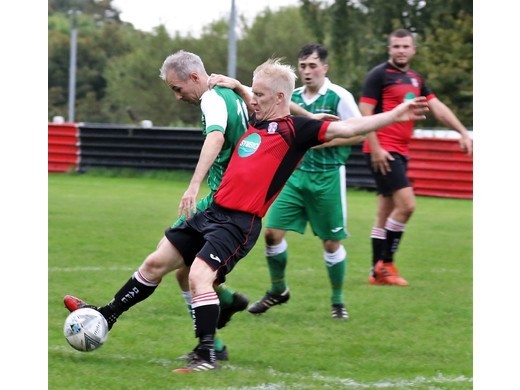 David Forbes on the ball for Drum v Martin Currie

Both teams started with intent with and almost immediately St Pats produced had a couple of fruitless pops at goal before the home side went ahead in the tenth minute. Winning a corner kick, the Drum would take advantage of excellent delivery into a crowded area leaving left back Ross Cluness to find the time and space get the ball over the line.

This was an encounter that caught your attention with every blade of grass covered the only surprise was the wait till the closing minutes of the half before another goal was scored. The goal followed a spell when St Pats were in charge and when Michael Symington made progress out on the right before leaving Ciaran McElroy who escaped his marker to produce with a quick turn & low drive that found the spot just inside the keepers left hand post.

It’s fair to say, the equaliser changed the dynamic of the game and with just ten minutes of the restart the Saints were ahead for the first time.  The goal would result in teamwork and quick reactions with Ryan McColl & Mathew Devine combining to set up Ciaran and thought cornered between two opponents and goalkeeper managed to find the net with his second of the game.  Then not to be left out, two minutes later Kevin McElroy’s let fly, his super volley giving Stephen Mather no chance to stop.

“Game Over” no chance. Play continued in robust mode on the heavy strength sapping surface and going into the last ten minutes a chink of light for the home side when Connor Higgins swept the ball past St Pats keeper Gallacher and set up an exciting finish to proceedings.

Many thanks for John for the report and Picture

10-man Saints go down to Wishaw

Oban Saints took on high flying Wishaw HSFP at a rain-lashed Glencruitten Park on Saturday and the visitors returned home with a well deserved 4-0 win under their belts.

The home side were still struggling with injuries and non availability of players, but all credit to Wishaw they turned in a first class performance to take home the three points.

Wishaw took the lead in the 11th minute when Saints stand-in goalkeeper Jamie Strachan let a Sean Lindsay header slip through his grasp with the ball ending up in the net.

The game was flowing from end to end and Saints had a couple of good efforts on goal from Ross Maitland and Donny Campbell which were well dealt with by FP keeper Sandy Thomson.

Both teams were getting the ball down and passing it around in the difficult conditions and it was Wishaw who increased their lead when the Saints defence failed to deal with a long ball which took a wicked bounce off the surface and the impressive Josh Payne was on hand to knock the ball home.

Sandy Thomson came to his team’s rescue just before the half time whistle when he dived to save a Craig MacEwan header which looked like it might sneak in at the keeper’s left hand post.

Any hopes of a Saints come-back were dashed after only five minutes of the second half when central defender Steven MacLeod was shown his second yellow card of the match by referee Tony McCann for dissent.

Credit to the Oban side they kept trying to play the ball about, but it was always going to be an uphill struggle for the 10 men against a very capable Wishaw outfit.

The visitors increased their lead in the 62nd minute when Luke Dickson slid in at the far post to knock the ball home and they rounded off the scoring in the 85th minute when Zak Caldwell netted from close range to make the final score 4-0.

Many thanks to David for the match report

Follow the link below for a look at the WestPark v Third Lanark highlights, many thanks to WestPark TV for the link

Fallin progressed into Mondays 3rd round draw with a comprehensive victory over there Caley league opponents that saw them score 5 in a blistering 2nd half performance.
With a full squad to pick from for the 1st time this season we showed the strength and the quality that we have and this proved too much for the home side in the end.
Having dominated the 1st half Fallin were to rue several missed chances the best of these falling to Mcguckin , Donaghy and Weir. At the other end Watson had to be on his toes in goal to tip a S Jackson free kick round the post with Stennys best effort in the 1st half.
HT 0 0
The 2nd half started in similar fashion with Fallin probing and the deadlock was broken on 50mins when Michael Weir squeezed his effort in from a tight angle. Weir doubled the lead after the impressive S Henderson delivered a great cross from the right and Michael buried his header past McMenemy in the Stenny goal.
It was 3 on the hour mark when Joe McGuckin set up Donaghy to finish well from close range.
Stenny then had a spell and again Jackson came close hitting the bar with an audacious free kick that almost caught Watson out but the effort came back off the bar.
Fallin again regained control and the game was over when Andy McGown scored a peach of a free kick to make it 4.
It was then finished off in style when great play from Geo Robinson set up Jamie Bone who finished emphatically from the edge of the box.
FT 0 5

Overall a really impressive performance from the lads and we now look forward to the 3rd round draw.

Many thanks to Ross for the match report