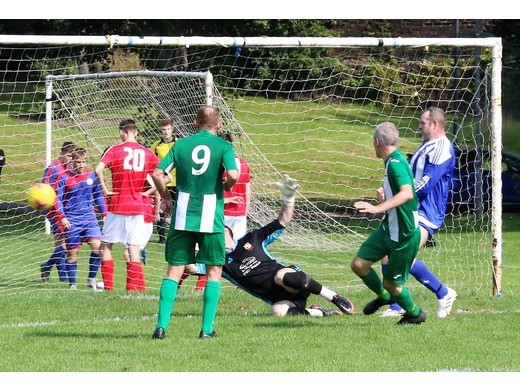 Excellent result and performance from the away side. When you watched both sides doing their respective warm ups today it wouldn't take a rocket scientist to work out due to numbers that both sides looked to be missing players for whatever reason and that it was always going to be whatever side coped best would most likely come out on top.

The FPs opened the scoring midway through the half when Thomson latched onto a perfectly weighted John Neil pass to lash am Unstoppable shot past the home keeper. With 10 minutes to go to h-t ( am no going to lie ) ah missed the 2nf goal due to being away for more water in the blistering heat when Luke Dickson notched his 1st of the match to put the away side 2-0 up at the interval. The FPs felt they should have given a definitive penalty b4 ht but ref O'Neil waived away what looked like a certain spot kick.

BANNOCKBURN pushed hard to get back into the game and were rewarded and reduced the deficit to 1 with 15 mins to go when an inviting low cross was swept home from close range to give the home side some hope. This hope was short lived however when Luke Dickson swept home his 2nd goal of the game from some 10 yards out to give the visitors a 3-1 advantage going into the closing minutes.

As Bannockburn streamed forward a short pass back from a Bannockburn defender was pounced upon from the lively John Neill and he slipped the ball wide of the keeper for FPs captain James Bryson to walk the ball into an empty net to leave the final score Bannockburn 1 v 4 Wishaw High School FPs.

Many thanks to Gav Torrance for the Match Day Report

It took St Pats 15 minutes to open their account, the goal coming courtesy of Ryan Deeley. His tenacity out on the right was followed up with a dangerous cross into the box where the mercurial Ciaran McElroy in position to find the net despite the attention of two defenders.

Following the goal, the visitors almost drew level when the excellent Gary Pettigrew delivered a tidy cross that forced Gallagher into a brave save on his goal line as marauding Jordan Wood closed in for the kill.

However, just passed the half-hour mark United’s luck changed dramatically when an innocuous ball posted into the goal area was followed by a communication meltdown in the heart of St Pats defence that allowed the visitors to get back on level terms.

But celebrations had hardly died down when fortune fell to the alert rather than the brave. Gartcosh would return the favour with a defensive mistake of their own that allowed Ryan Deeley the simple task of rolling the ball home from close range.

The visitors were rattled, and matter got worse when the usually reliable Stuart Wilson, the former Scottish Amateur International keeper made a hash of a clearance, thus allowing Kevin McElroy to quickly find Martin Currie who made no mistake from close range.

So, a comfortable 3-1 advantage to take into the second half but it was the visitors who looked the more likely, moving the ball around the park with confidence and intent but their search for a way back into contention remained fruitless against the home sides stout defence.

Indeed, St. Pats eased any nerves when they grabbed a brace in the final ten minutes of the game. Both goals were converted by young David Connolly with the noteworthy assistance of first Ciaran McElroy and then big cousin Kevin.

Many thanks to John Rodgers for the Match Report and picture

Bad day all round for Oban Saints

The Oban side were missing a number of key players but made the 240 mile round trip with a squad which included several second team players who helped bolster the squad on the day.

Unfortunately for Saints their lack of match sharpness and squad depth cost them dearly against a rampant Gow side which had already netted 25 times in their opening four league and cup fixtures.

After matching their hosts well for 30 minutes Saints fell behind to a penalty kick successfully converted by Graham Gracie following a  controversial award by referee Dougie Gunning.
Saints then spurned the chance to equalise when Nathan Wharton saved Donald Campbell's spot kick before Alex Craik put past his own keeper to give the hosts a two goal half time lead.
A succession of uncharacteristic second half errors from the visitors were ruthlessly exploited by the free scoring hosts who were clinical in their finishing and relentless in their pursuit of goals to add to their already impressive tally finally running out 9 - 1 winners thanks to four goals from Graham Gracie, two from Jordan McCrorie an own goal and one apiece from Derrin Mackenzie and Jack Turley. Lewis Cameron, who was probably the best player on the pitch, scored Saints' consolation goal.

Any doubts harboured about the size of the challenge facing the Oban side in their debut Premier Division season will have been dispelled by this humbling at the hand's of the league's early pace setters and Gaffer Willie Gemmell and his charges must re-group quickly.

Top of the manager's agenda will be getting a full strength team on the park coupled with a swift return to the commitment levels shown by the players which won Saints promotion to the Premier Division in the first place.

A bad day at the office wasn't over for the Saints' squad as it took them seven hours to get home from Lesmahagow after a serious road accident at Luss closed the A82 and the boys had to make a detour on the narrow A814 from Helensburgh to Arrochar which was gridlocked for hours. The squad eventually made it to the single track road which took them over Glen Douglas and back onto the A82 at Inverbeg and finally back to Oban at 11pm - a day the club and players will want to forget.

Many thanks to David Buchanan for the Match Report and the picture. 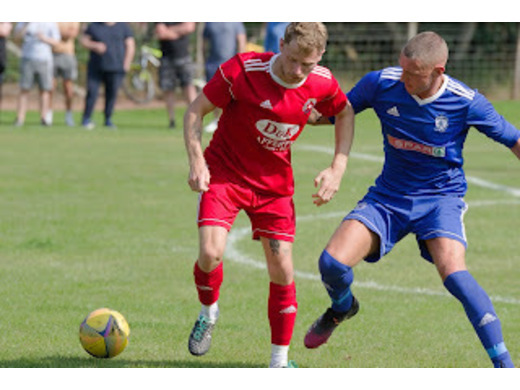