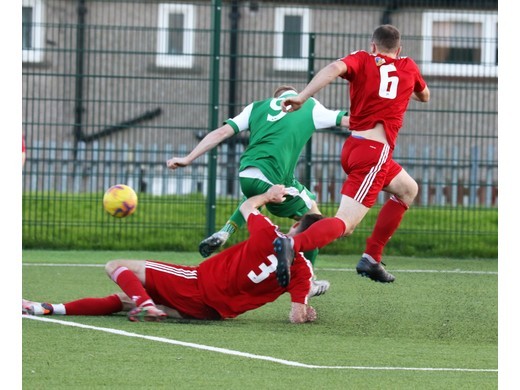 St Pats seemed in a hurry to get the league encounter against Oban over in a hurry. Dominating proceedings from the start, their first serious attack left Ross Cannon disappointed when his searing shot from distance rebound off the crossbar.However, in the seventh minute no mistake with the trajectory this time. With the visitors pinned back in their own area a desperate clearance was picked up by Liam Rowan just upside the 18-yard box, the opportunity leaving him to finish with super right foot volley that gave Graham Douglas in the visitors goal no chance.The wonder goal gave the home side the comfort they required but failed to convert several chances, as for the visitors they were given little room to manoeuvre or exploit in an increasingly hectic first half. Their only threat of note coming from a well-positioned free kick in the 23rd minute, unfortunate for them the ball was missed by all as it sailed harmlessly across the St Pats keepers goal area.H.T. 1-0Withing a minute of the restart Matty Devine could only look in anguish when his neat half-volley rebounded of Graham Douglas near post, but the visitors luck would not hold.St Pats second soon followed, bursting any rising optimism in the Oban ranks. Liam Rowan found Ciaran McElroy who immediately broke from the half-way line on a determined solo run with a posse in hot pursuit. Never going to be caught, Ciaran entered the danger zone and waited till Douglas reacted before finding the target from around the penalty spot.The visitors never got a grip of the contest, this might have led to sagging shoulders but to their credit Oban continued to plug away.Meanwhile, St Pats management got what they ordered, a solid team performance and three valuable points but like their opponents on the day expectations remain high.

Many thanks to john for the report and picture and the very best of luck to St Patricks FPi in their West Cup Final on Friday night.

The first CSAFL league fixture with Gartcosh United was a game of two halves with Burn four down within half an hour.

After four minutes an almost cleared ball from the Burn defence ricocheted into the goal putting the visitors one up.  After 11 minutes Burn struggled to clear from corner flag.  The resulting cross ball was slotted home doubling the Gartcosh lead.  A shot from outside the box made it three soon after.

Burn tried to respond on 15 minutes when Mark Fox shot wide.  Mitchell Reid had a headed attempt too that went close.  Burn keeper Adam Young thwarted the visitors’ next attempt. However, in the follow up Burn conceded a penalty which Gartcosh despatched.

Burn tried to hold their own for the remainder of the half with a Declan Wood freekick blasted just wide of the post.

Not long into the second half, Ryan Aimer replaced injured Christian Marcu. Niall Burns went off injured replaced with Gavin Clark.  Burn now started to cohere better with chances such as Wood through one on one but hit the onrushing keeper.

Just after the hour a Dylan McGowan cross had Wood head back across the goalkeeper but hit the post.  An Aimer cross meant another strong header from Fox just wide.  In the final fifteen minutes, accepting the ball from Wood, Andy Byrne sidestepped and shot from 25 yards beyond the keeper.  Moments later, Fox scored a Burn second.  And an Aimer cross for a Kenny Feakes header drew a magical save from the goal keeper.

In a Gartcosh attack, last man Logan Downie, saw a red card.  Finally, Fox reduced the deficit to one when he scored with seconds to go.

Thanks to Tartan Arms and MacGregors Building Services for their team sponsorship.

Next week Burn have a home tie in the West to Stewarton. Kick off 2pm.

Many thanks to Derek for the match report. And the very best of luck on Saturday