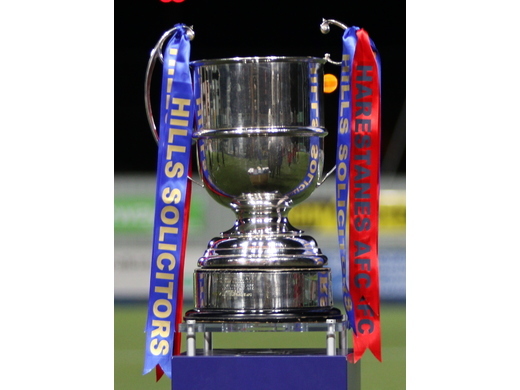 Last night saw the first silverware of season 2021 2022 up for grabs and in an all Premier League Final it was billed as a cracker and it did live up to its title.

With the game being live streamed to allow those not able to make it to Falkirk the league had covered all the bases to ensure it was well covered.  That said a healthy crowd turned up to watch the game and they were not to be disappointed.  Our league sponsor was also in attendance, Mr Archie Hill and he was impressed by what he saw on show.

It was always going to be a tight affair with both goalkeeper making vital saves early on.  Harestanes were the first to break the deadlock and went one up.  It was down to Uddingston to fight their way back into contention and they battled hard to pull one back.  Chances came and were missed and late on in the second half they pulled level to take the game into extra time.

It was to be Harestanes night as they struck early on in the first period of extra time  despite constant pressure from Uddingston they could not find that elusive goal to take it to penalties.

It was a tremendous game and a great showcase for the standard of football that the League produces.  We'll done to both teams and our officials who had a great game also.